VIBRAPHONE by Ana González Salas – 1ºB

The vibraphone is a percussion instrument of definite pitch. It belongs to the idiophones family and is a cross between the glockenspiel and the xylophone.

It consists on graduated steel bars and tubular resonators, producing pitched sounds. It is played by using sticks to hit the bars.

Tubular bells are a percussion instrument. It has a definite pitch, that is to say, when it is struck with sticks it produces sounds of the musical scale (specific notes). It is also a monophonic instrument, namely, which produces only one sound at a time.

It is a metal instrument, comprising of a set of tubes of different lengths from each other. Due to these changes in lengths it can produce lower or higher sounds.

The celesta is a musical instrument similar to the upright piano. The difference is that a celesta has got metal bars in place of strings. For this reason, it is an idiophone instrument.

When hitting the metal bars, it creates a resonance on a wooden box,

making a “heavenly” sound, from which comes its name.

MARIMBA by Paula González Bardón – 1ºB

The marimba is a tuned percussion instrument. This instrument is played with sticks or mallets, and consists of wooden blocks. An important feature is that it has two rows of blocks, like a piano keyboard.

It is polyphonic, that means they can produce several sounds at the same time.

The modern marimba was developed in Mexico. 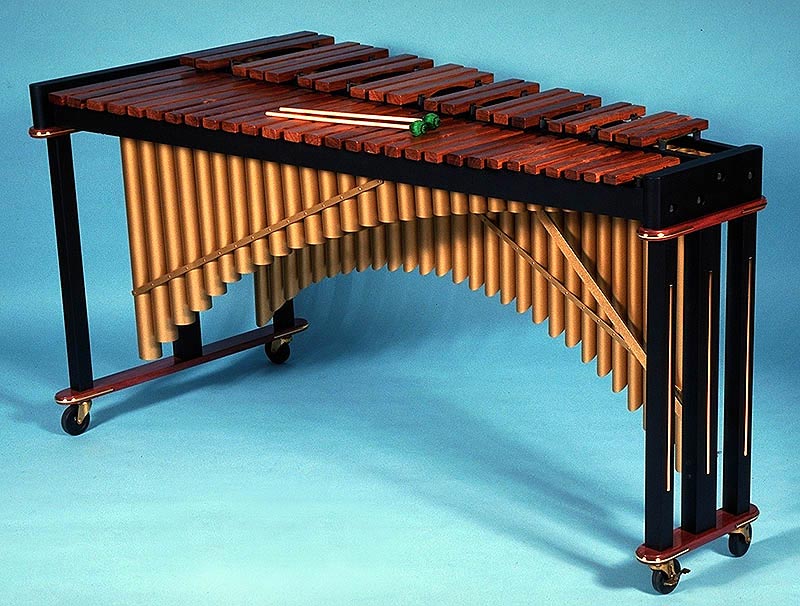