VIOLIN  by Patricia Bravo Presa – 1ºA

The violin is a chordophone instrument, bowed string instrument. It has a high definite pitch and it is usually played standing up or sitting on a chair.

The sound is produced by rubbing the string with a bow. It is made of different kinds of wood.

VIOLA by Ángela Caviedes Magdaleno – 1A

The viola belongs to bowed string family, a group of chordophone instruments. It is the second higher instrument in her family because it is a little bigger than the violin.

The viola holds over the shoulder. It is made of wood and it has four strings, like the other instruments of the family.

CELLO by Teresa Cortina Fernández – 1ºA 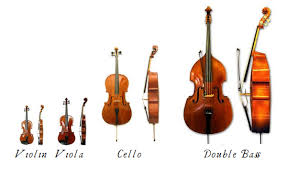 The cello is a chordophone, bowed, instrument and has a definite pitch.

It is made of wood. It is played with a bow. And it has got four strings.

The cello is too big to be played under the chin like the violin and viola. Instead, it is played with the musician sitting down with the cello placed between his or her legs.

The person who plays the cello is called cellist.

THE DOUBLE BASS by Paula García González – 1ºA

The double bass is an instrument of the string family, it is the largest of these instruments.

It has got four strings that produce sounds when they are rubbed with a bow.

In addition, it is used in jazz, playing pizzicato. In this technique, the player plucks the strings with his fingers.

In a symphony orchestra, the doubles bass are located on the right and bottom of the director. 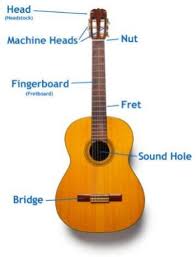 It is a chordophone, a plucked string instrument.

The Spanish guitar is a polyphonic and a tuned instrument.

It is made of wood, with six strings of different thicknesses.

The guitar is a typical instrument of Spain, where it is played in Flamenco music.

There are a lot of kinds of guitars, in many different sizes.

HARP by Alfonso Gutiérrez Rodríguez – 1ºB The harp is a chordophone instrument of the plucked string family. It is a polyphonic instrument and it has got a tuned sound.

It is plucked with the fingers and it has got pedals to change the sound.

There are big or small harps. It has got a soft sound because it has got a little sound box.

HARPSICHORD by Rocío Odriozola García – 1ºA

In the instrument, the sound is produced by plucking the string with plectrums driven through a keyboard.

This instrument was used a lot in the Baroque period but little by little we forgot about it and most of the pieces written for it, began to be interpreted in the new pianoforte.

PIANO by Marina Pérez García – 1ºA

The piano is a struck string instrument. This instrument produces sounds when the hammers strike the strings. It is a polyphonic instrument because it produces two or more sounds at the same time.

It is a tuned instrument. Each sound is different depending on the thickness of the strings, the thinner strings are, the higher the sounds will be. The hammers that strike de strings are powered by the keyboard.

There are two types of pianos: the upright piano and the grand piano